In this video, we will learn how to perform one of the fundamental tasks in statistics – hypothesis testing!

There are four hypothesis testing steps in data-driven decision-making.

First, you must formulate a hypothesis.

Second, once you have formulated a hypothesis, you will have to find the right test for your hypothesis.

Third, you execute the test.

And fourth, you make a decision based on the result.

Let’s start from the beginning. What is a hypothesis? Though there are many ways to define it, the most intuitive I’ve seen is:

“A hypothesis is an idea that can be tested.”

This is not the formal definition, but it explains the point very well.

So, if I tell you that apples in New York are expensive, this is an idea, or a statement, but is not testable, until I have something to compare it with. For instance, if I define expensive as: any price higher than $1.75 dollars per pound, then it immediately becomes a hypothesis.

Alright, let’s get out of politics and get into the hypothesis testing steps.

Here’s a simple topic that can be tested.

According to Glassdoor (the popular salary information website), the mean data scientist salary in the US is 113,000 dollars. So, we want to test if their estimate is correct.

The null hypothesis would be: The mean data scientist salary is 113,000 dollars,

While the alternative: The mean data scientist salary is not 113,000 dollars.

The concept of the null hypothesis is similar to: innocent until proven guilty. We assume that the mean salary is 113,000 dollars and we try to prove otherwise.

This was an example of a two-sided or а two-tailed test. You can also form one sided or one-tailed tests. Say your friend, Paul, told you that he thinks data scientists earn more than 125,000 dollars per year. You doubt him so you design a test to see who’s right.

The null hypothesis of this test would be: The mean data scientist salary is more than 125,000 dollars.

The alternative will cover everything else, thus: The mean data scientist salary is less than or equal to 125,000 dollars.

It is important to note that outcomes of tests refer to the population parameter rather than the sample statistic! As such, the result that we get is for the population.

Alright. We showed you the four hypothesis testing steps. 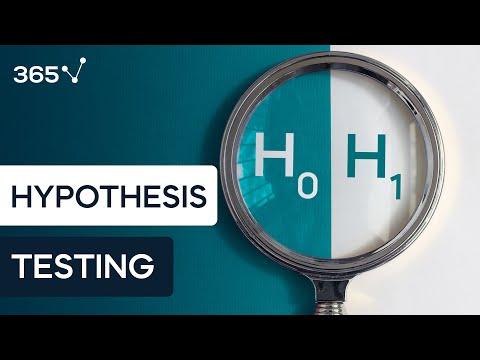 How to write to database in Tableau Prep in 2020?

Conditionals and Loops in Python: Learn how to use them together

What is Radar Chart in Data Visualization

What Is an ARIMA Model?

How Goodyear is transforming from a manufacturing company to a mobility-led, technology company